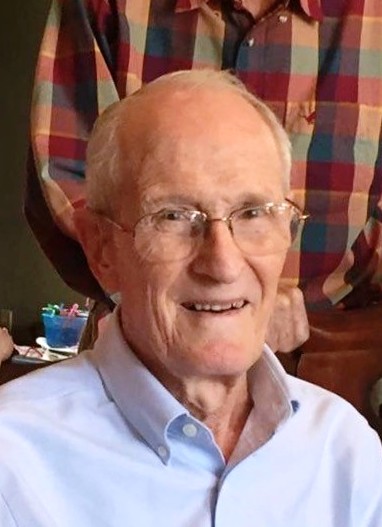 Edwin Holt Graves Sr., 95, passed away Monday, July 1, 2019.  He was born in Sparta, GA on September 25, 1923, to Richard Augustus Graves and Meta Bryan Graves.   Ed was raised in Jacksonville and graduated from Lee High School.  He attended the University of Georgia for 2 years and then joined the Army Air Corps at the invitation of President Roosevelt. Ed received his degree from Georgia Institute of Technology after he was discharged from the service. Ed was passionate about many things including the Masters swimming program, sailing, genealogy and especially his family.

He was married for 65 years to Tayloe Lawton Graves, who predeceased him in 2017.  Survivors include his three sons, Holt Graves (Betty Ann) of Jacksonville, Corbin Graves (Barbara) of Tallahassee, and Bryan Graves of Atlanta.  Grandchildren include Corbin Graves (Byerly) and children Chesson, Anna Corbin and Walker; Lawton Graves (Sarah) and children Weslyn, Sidney and Chambers; Aaren Graves; and brother J. Bryan Graves of Jacksonville.  He was also predeceased by his parents and his brother, Richard Augustus Graves, Jr.

A Memorial Service will be held at 2:30pm, Monday, July 8th, at St. John’s Episcopal Cathedral, Jacksonville, Florida.  The family will receive friends after the service in Taliaferro Hall. Memorials in Ed’s memory may be made to St. John’s Cathedral 256 E. Church St., Jacksonville, FL 32202. Services under the care and direction of Evergreen Funeral Home.