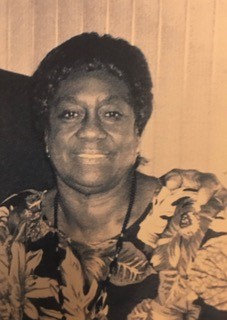 Mrs. Jackson was a life-long and faithful member of Grace Missionary Baptist Church where she served on numerous committees and sang in the choir.  Because of her long tenure there, she was graciously known by her church family as “The Mother of the Church”, Amen.

Mrs. Jackson was also known throughout her community, for helping others. Many honors and awards for her community service was bestowed upon her being recognized for her efforts by various Community Coordinators including several (former) Mayors of Jacksonville, FL.

Mrs. Jackson was a driving force in the planning and development of the Longbranch Senior Community Center, which exists in her neighborhood. After numerous years as an attendee of Longbranch, she became a volunteer, faithfully serving other seniors well into her eighties.

Mrs. Jackson was also a guiding force in the lives of those who loved and cared for her; all knew her as a bright, optimistic and fun loving person who loved to fish, travel, socialize and entertain. Although Idella or “Della,” to many who loved her, just missed bringing in her 100th year, she epitomizes the saying “It is not just the years you have in your life, but rather, the LIFE you have in your years.”