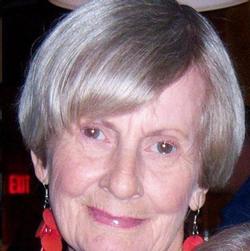 Juanita Margaret Clarke Snure
On the morning of December 5, 2015, Juanita passed away, in Jacksonville, Florida. She was 82.

Juanita was born to Edwin & Lillian Clarke on July 6th 1933 in the town of Royal Oak MI.

Juanita learned to shoot from her father and the two would hunt together. However, she never shot anything because she had a great love for animals.

She met her future husband, Arthur, at Royal Oak High School, who sat next to her in home room. With her parents blessing, Art proposed to her at Great Lakes Naval Training Center. They were married 12/15/1951, she was 18 years old.

Art & Juanita lived in Royal Oak, where they had three children. She worked as a secretary. Their travels took them to Overland Park, KS, Winter Park, FL & Little Rock, AR. They finally settled in Jacksonville, FL after their children were grown. There, she retired from Owens Corning Fiberglass, Roofing Division, where she provided clerical support for 5 traveling salesmen.

In her retirement, she helped support a presidential candidate, rehabbed houses for a while and enjoyed her grandchildren & great grandchildren. Her passion was animals. She had many pets in her lifetime, the last of which were 3 feral cats she turned into loving house pets. She was a champion for homeless pets.

In 2014, Juanita suffered 2 strokes. She lived at home & was cared for by two loving aides, Heather & Cindy. They kept her active & engaged. Her family is thankful for her dear friend, Angelia Davis, who helped care for Juanita as if she were her own mother.

Her family & close friends will gather for a celebration of her life. Inurnment will be at Jacksonville National Cemetery where she will await her husband.

Arrangements are with Evergreen Funeral Home and Crematory