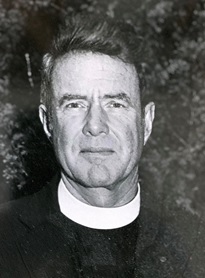 WILLIS BARNUM COKER MCCARTY.  Died May 30, 2021 at age 91.  Barnum was born in Jacksonville April 10, 1930 to Harvey P. McCarty and Nellie Coker McCarty. He attended public schools, graduating from Andrew Jackson High School in 1948 where he played baseball and football. After a year of working for Riverside Chevrolet Barnum attended Florida State University for one year, after which he transferred to the University of the South (Sewanee) from which he received his BA from the College in 1954 and his Masters of Divinity from the Seminary in 1956. Since his retirement he was awarded an honorary Doctor of Divinity from Sewanee. Upon graduating from Seminary he was Ordained Deacon in June of 1956. On August 6 of that same year he and Betty Ann Roberts of Tallahassee were married, he was ordained priest on April 15, 1957. Barnum and Betty Ann were blessed with three lovely daughters.  During his ministry Barnum served as Rector of Trinity Church, Apalachicola 1956-59; Director of Camp Weed and Diocesan Youth 1959-62; Rector of St. Andrew’s, Panama City 1962-71; and Rector of St Mark’s, Jacksonville 1971-95. After retirement Barnum served as Interim Rector of St. Thomas’, St. Petersburg; St. Peter’s, Fernandina Beach; St. John’s Cathedral, Jacksonville; and, Grace Episcopal, Orange Park. Also, during his ministry Barnum served as a Chaplain in the Florida Army National Guard, retiring after 30 years’ service with the rank of Colonel (06). Barnum served as a Deputy to ten successive General Conventions of the Episcopal Church, serving once as Vice President of The House of Deputies. He also was elected to serve two terms on the National Church’s Executive Council (12 years), appointed to serve six years on The Presiding Bishop’s Fund for World Relief, the Nominating Committee for the election of a Presiding Bishop, the Administration and Finance Committee, and the Investment Committee.

When not working, Barnum enjoyed many activities, especially spending time with his family and friends. He loved sailing on St. Andrews Bay, boating on the St. John’s River, playing handball at the YMCA, early morning walks on the TCC golf course, fishing, singing, dancing and family beach time at St. Teresa Beach and Amelia Island. Later in life he enjoyed playing golf with good friends. Above all, Barnum’s top priorities in life were to love and serve God, Family and Country. Well done good and faithful servant!

A funeral to celebrate Barnum’s life will be held at St. Mark’s Episcopal Church, 4129 Oxford Avenue, Jacksonville FL 32210, on June 22, 2021 at 11 AM. Due to the large number of family and friends expected to attend, all seating in the church will be open, with overflow in the chapel and parish hall. Face coverings are optional.  The service also will be live-streamed on the St. Mark’s website.   Following the service, the Committal will take place in the memorial garden and include military honors.  Afterward all are welcome to join the family at a reception in Leatherbury Hall.  In lieu of flowers the family requests donations be made to St. Mark’s Episcopal Church or the Bullock Scholarship Fund of Camp Weed http://dioceseflfoundation.org/make-a-donation.