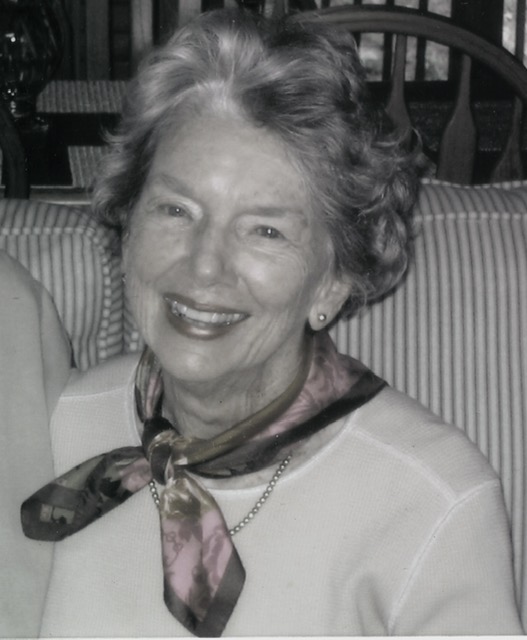 Born in Knoxville, Tennessee on January 19, 1926 to Polly and Frank Bartley, Pokey spent a portion of her childhood in Miami before moving to Jacksonville and living the rest of her life in a radius of three miles in the Riverside-Avondale-Ortega neighborhoods.  At the age of 12, friends at John Gorrie Junior High School dubbed her “Pokey” and the name stuck for the remaining 84 years of her life.

Frank owned the Bartley Coffee Company whose taglines were “No Grounds for Complaint” and “Just for Instants”.  Pokey inherited her father’s humor and wit and loved parties and dancing to the music of Glenn Miller’s Band on the Ortega Pier.  She was a student at Robert E. Lee High School and during World War II, attended Chevy Chase Junior College in Washington, D.C.  She was a member of the 1946 Debutante Coterie and earned her Bachelor of Arts degree at Stetson University.

As an only child, Pokey dreamt of being part of a large family and she met the man who she would build that family with when she was 14 years old.  Tow and Pokey met in front of The Bolles School and their courtship began two years later.  They would marry in 1948 when they were both 21 years of age and they started their married life in the officer quarters of a World War II Quonset hut in Deland while Tow went to law school and Pokey attended Stetson.

The next 25 years of life for Pokey were filled with adventure, family, and friends.  Boating trips with the Florida Yacht Club, summers at the North Fork Ranch in Middleburg, and parties at the Richmond Street house were annual favorites.  Pokey and Tow showed their young family all 50 states on a retired Greyhound Bus they had converted into a camper.  As the wife of a developer, Pokey named streets and her legacy is still felt today in a Cedar Hills subdivision nicknamed the “Fairy Tale” neighborhood.

In the 1950s, Tow came home one night and asked Pokey to create 50 street names by the next morning for a new neighborhood being built for first-time homeowners.  Knowing young families would be moving there, and raising her own young children, Pokey included names such as Peter Rabbit Road, Humpty Dumpty Street, and Tinkerbell Lane.  If you have ever wondered about the “Fairy Tale” neighborhood on the Westside, Pokey is responsible.

In 1972, the year of her 24th wedding anniversary and at the age of 45, Pokey became a widow with Tow’s untimely and unexpected death.  For the next 15 years, she raised her children on Richmond Street and invested her time in charity work.  Her door was open to all; children would come to see her doll house and the secret closet that was built during Prohibition.  Pokey was active with her Garden Club, Junior League, Girl Scouts of Gateway Council, Salvation Army, Book Club, and the Lee High School Girl’s Brown Bag Club.  She also began writing children’s stories published by Children’s Highlight magazine, taking jazz piano lessons, and studying the Bible with her church.

Pokey started a new chapter of her life on her 59th birthday in 1985 when she married retired Jacksonville physician, Dr. James “Jim” G. Lyerly, Jr.  They were married 35 years and for Pokey, the adventures, family, and friends continued: international travel with Jim, Disney World trips with the grandchildren, an annual family reunion on Ocracoke Island in North Carolina, and attendance at countless dances, games, and school events were just a few of the favorites that were on her calendar.

To fully tell Pokey’s story, her deep faith cannot go unmentioned.  She was a disciple of Christ in the purest sense: dedicated to His teachings, passionate to share His word with others, and disciplined to live the life of a Christian.  She developed her own outreach: distributing business cards with the telephone number of her Preacher at the South Jacksonville Church of Christ.  Any of her monetary transactions included one of these cards with her cash or check.

In her final months, she was so happy with all of the visits and her assiduous letter writing lasted until the very end.  She will be missed, she will be remembered, and she is returning to the Lord who gave her such strength and warmth here on Earth.

Following a private burial, Pokey’s family invites you to celebrate her life and legacy at a reception at Epping Forest Yacht Club, 1830 Epping Forest Dr., Jacksonville, FL 32217 on Friday, June 10 at 12:00 PM.  In lieu of flowers, memorial donations may be offered to the Salvation Army’s Towers Center of Hope, Attention: Development, 328 N. Ocean St., Jacksonville, FL 32202.