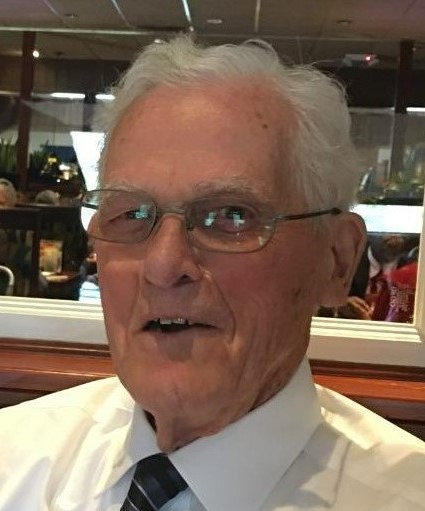 Phillip Roy Hueneke was born in Revere, Massachusetts on April 28, 1924 to Ann (Crampton) Hueneke and Johann Albert Hueneke.  He spent most of his early life in the Boston area and enjoyed growing up in an area rich in history. He took violin lessons as a child and enjoyed playing into his 90s.  His mother was born in Boston, Massachusetts in 1882 and his father was born in Bremen, Germany in 1891. Phillip had five siblings.  Robert was the oldest, followed by Ruth Anne, then Tom, Phillip’s twin sister Phyllis, and finally Elsa Dorothy.  Phillip passed away on January 14, 2021 at 96 years young.

Phillip worked at his father’s grocery store when he was young.  He joined the Navy in 1941 when he was 17 years old.  His first assignment was at the Naval Air Station in Jacksonville, Florida.  While stationed there he worked part time at a feed store.  One day while loading supplies into a customer’s truck he met his future wife, Ruth Kratz.  It was love at first sight.  But their marriage was postponed because the world was at war and he was in the military.  They were finally able to get married on November 18, 1944.

During WWII, Phillip first served on the USS Albemarle, a seaplane tender that was accompanied by two destroyers.  They were often chased by submarines but were able to escape unharmed.  Once they brought back twenty-seven German prisoners of war, survivors of a sunken U-boat.  Later during the war, he served on the aircraft carrier USS Bennington where they were involved in 45 missions.   On the ships first cruise he was awarded “USS Bennington Plank Owner Certificate”.  He was a Boatswain’s Mate and served on a six-man gun crew manning 5” anti-aircraft guns.  Their primary job was to protect the ship from incoming kamikaze aircraft.  Some of the medals he earned were American Defense medal, American Campaign medal, Asiatic Pacific Campaign medal, three Bronze Stars, Victory medal and Imperial Domain of the Golden Dragon.  After the war he was honorably discharged in 1945.

Phillip then went to work for Florida Power Company until 1947 at which time he joined the Air Force.  During his time with the Air Force, he was an aircraft mechanic and electrician.  Later he went on to become an instructor on planes of all types, but primarily super tankers.  He loved his job.

Phillip retired from the Air Force in 1963.  Following his military career, he worked for the City of Jacksonville and retired.  Then later employed by Jacksonville Electric Authority as an electrician in power transmission and retired after 20 years with them.

Phillip was a member of Franklin Street Baptist Church and shared a long-time relationship with Pastor Terry Gore and his wife, Bobbie Gore.  He served as a Deacon and volunteered in many positions.  He loved singing and music.  He shared his love for Christ and was loved and respected.  His faith was his testimony until the very end.

Due to Covid pandemic, we will have a Celebration of Life for Phillip later this year with Military Honors.  Details will be announced when they are finalized.  He has been cremated and his ashes will be interred at Evergreen Cemetery in Jacksonville, Florida.